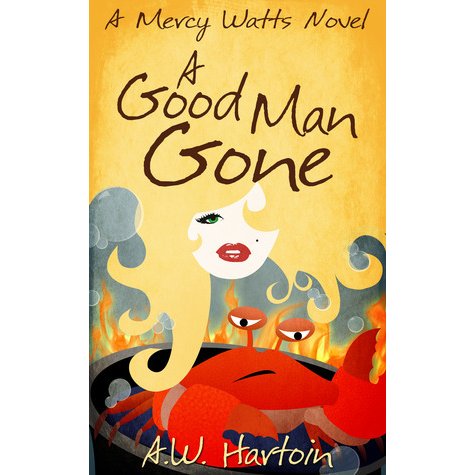 Mercy Watts is a part-time nurse. She works through an agency that places her in hospitals around St. Louis, Missouri, that are short staffed or overloaded with patients. But when she’s not at work, she’s often getting sucked into odd jobs for her dad, a highly decorated and now retired St. Louis PD detective. Mercy couldn’t care less about her dad’s new PI service until her parents go on vacation and her dad’s former partner dies under mysterious circumstances. Now it’s left to Mercy to uncover the truth before it’s too late.

A Good Man Gone is the first book in the Mercy Watts Mysteries series. It follows Mercy around her life as she tries to use the investigative skills she’s picked up from watching her father work over the years to track down killers. Unlike most cozy mysteries, this series boasts a fairly large cast. Besides Mercy and her parents, there are her dad’s three friends (two now since one is the victim), her mother’s best friend, Mercy’s Aunt, her two godmothers, her boyfriend, and her ‘cousin’ (by marriage, not by blood) Chuck, who’s basically the son her father never had. In addition to these 11 ‘regulars’, you also meet various other police detectives and people around St. Louis that Mercy deals with during her investigations.

The story takes place in the Midwest, and unlike most cozy mysteries, actually, includes quite a bit of out-of-town travel. The characters are all complex and quirky in their own ways and it lends well to the storyline. There’s more than just murder and romance going on in this series, and that really makes me interested in continuing reading it despite the rather confusing cover and somewhat slow beginning. I would definitely recommend this book to anyone who likes their mysteries with a side of colorful characters.