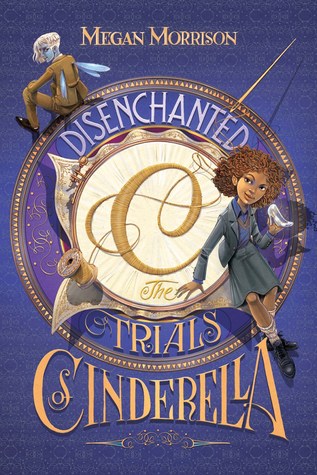 Ella Coach doesn’t want riches or fame, only justice for a mother who died working in a sweatshop. Prince Charming isn’t looking for true love, but he’s done playing with people’s hearts too, now that The Charming Curse has been broken. Serge is an executive fairy godfather. He’s granted wishes beyond your wildest dreams, even made queens out of barmaids, but now he caters mostly to the rich and famous who pay to be on his list. Until one day a name no one knows appears on it. Ella Coach.

This second installment in Morrison’s Tyme series is just as fantastic as the first. Unlike Grounded, in which we follow the characters on an epic quest of sorts, Disenchanted deals with problems much closer to home. A prince who is finally free to act like himself grapples with the world who liked him better the way he was. A girl who knows first hand the horrors of a sweatshop sets out to make things right. A fairy uncovers a nefarious plot to overthrow a corrupted king. We also get a Cinderella who’s a person of color, and she’s not the only POC character! There’s also a Crimson Fairy who is dealing with everyone hating him base don his heritage, and then the normal class wars that you see in most fairytales. There’s a lot going on here, but it all melds together beautifully.

While I was disappointed at first that we weren’t going to explore multiple kingdoms this time around, I found the in-depth look at a single kingdom infinitely interesting. Because Ella is dealing with worker compensation, the reader gets a good hard look at the economy in the kingdom of Blue. Morrison has a talent for taking real-world problems and making them understandable to the average person, no matter their age. This narrative on the importance of all lives, not just the wealthy, is something everyone can relate to, especially right now.

The world building was wonderful yet again, and I can’t wait to see what else Morrison and her world of Tyme co-creator Ruth Virkus come up with for the next book in the series, which has tentatively been titled Transformed: The Perils of the Frog Prince and is due to be published in Summer 2018.

Other reviews in this series:
Book #1 – Grounded: The Adventures of Rapunzel
Book #3 – Transformed: The Perils of the Frog Prince (To be published in Summer 2018)

One thought on “Disenchanted: The Trials of Cinderella (Tyme, #2) – Megan Morrison”