Weylyn Grey was raised by wolves. Ever since, he’s been a little bit different. He’s never sure why, but mysterious things tend to happen around him and his horned pig, Merlin. Through his friends Roarke, Mary, Meg, Lydia, and Duane, we learn about Weylyn’s life and its challenges.

I was granted an ARC of this book from NetGalley, and I purchased a finished copy as part of my Book of the Month box for October 2017.

This book was marketed as an American fairytale meets magical realism. While I wouldn’t go so far as to call it either of those, it does have the same sort of feeling as Big Fish. Weylyn’s presence is often associated with strange occurrences in nature, but he assigns all of the magical talent to his horned rescue pig, Merlin, not realizing that it has been him all along.

It was especially interesting to see how Weylyn adjusted to his strange life as he grew up in midwestern America in the 70s and 80s. I didn’t know how far into his life the story would take us, and it brought a surprising amount of closure to the end of the story. It’s rare that we get to see someone’s adventures through more than a single stage of life, and Lang’s take was refreshing. The characters are all original, flawed, and wonderfully human. Weylyn’s talents in no way detract from who he is a regular person – they just present extra challenges he must face as he grows up.

I enjoyed the story, and I hope they make a film version someday because I’m sure I’ll enjoy it as much as I enjoy other multi-part stories such as Big Fish and Forrest Gump.

Barnabus, Jane, and Simon are returning to the small town of Trewissick for a week away with their favorite great uncle – and to recover a priceless artifact the evil Dark has stolen from a museum. With them on their vacation is a mysterious young boy named Will Stanton. Unsure whether to trust Will with their secret or to forge ahead alone, the Drews will learn the difference between an outsider and an enemy as they race against the hourglass turned by mother nature herself to stop the Dark from rising.

This third installment in Cooper’s pentalogy is the shortest, yet the most chock-full of character development.  Barney comes into his own talents, Simon learns to tone down his temper, Jane finds her inner strength, and Will learns how to balance being a boy and an immortal. As the trio grows to a quartet, the bonds of the light grow stronger and the Dark is pushed back yet again. Cooper does an excellent job of taking a general storyline – darkness vs light – and creating it anew. With two books left in the series, I can’t wait to see where this series goes.

My favorite parts of this book involved Jane. Sure, she’s basically the only girl, but Cooper sets it up so this aspect gives her special access to knowledge and events that the boys are not privy to. This, combined with her open mind, allows for greater understanding of the implications of Will and Uncle Merry’s powers, and the truth about the fight against the Dark. While Barney and Simon only know that magic is playing a role in this fight, Jane can see and sense that this fight is bigger than four kids and an old man against a few unsavory people. Jane, without having it explained to her, understands that this is for all the marbles, and that while she isn’t the chosen one she’s still part of the fight. She actually reminds me of Hermione Granger from the Harry Potter series in many ways. She’s smart, she’s brave, and she’s unafraid to be herself. She doesn’t always know why things happen the way they do, but she’s here for it, and her good heart – like in a Grimm’s fairytale, almost – leads her in the right direction.

Lady Soraya and Commander Jiaan have formed a tentative alliance with the multifaceted Kavi. The young commander will direct the army, the last remaining deghass will navigate alliances, and the peddler will rouse the people and forge the first Farsalan sword to be made of watersteel – the same formula the Hrum have been using to decimate the Farsalan resistance. Together, they are Sorahb reborn, and only together can they hope to defeat the Hrum nation before their time runs out.

The final installment in The Farsala Trilogy brings all the pieces together. Although it still moves a little slowly, there is a lot of ground to be covered, opinions and allies that must be shifted into just the right places – almost like a chess match – before Sorahb can fulfill the destiny he was created for. The combination of magic, wit, strategy, and weaponry was very cool to watch. Every step in the trio’s plan to take back their homeland was inspiring to watch and filled me with pride. Jiaan, Soraya, and Kavi have developed so much since Fall of a Kingdom and it was truly a pleasure to see them shine in their big moments.

This story is not without its losses, as no war goes without casualties, and the losses are steep, both in the present day and in Sorahb’s time. But the making of a legend is no easy feat, and Hilari Bell succeeded wonderfully in her endeavor to lift the curtain on the ‘real’ story of Sorahb and the rise of Farsala.

Overall, this book touched my soul. I can’t resist an underdog story. Given how the first two books went, however, I think this entire series would read better as a compilation – all three books bound together – because of where the endings occur. It would make more sense if they were sections of one book than each as a stand-alone. Just thinking about our heroic trio makes me a little weepy with pride, but there is so much world-building and background to be shared given the story of Sorahb, that it can be disheartening to finish a book and feel lost. I think a compilation would alleviate this issue. 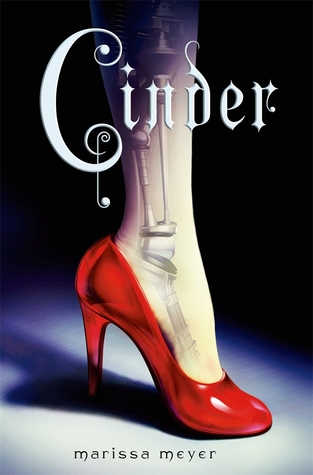 Cinder is just your average cyborg, living in New Beijing in an age where people like her are enslaved, and there is a plague sweeping the globe. Oh, and the queen of the moon wants to take over Earth. You know, normal stuff. So when the handsome Prince Kai visits Cinder’s mechanics booth at the weekly market with an android of national importance for her to fix, she naturally can’t say no. Everything that follows is nothing Cinder could have imagined, and her life suddenly has meaning beyond her wildest dreams.

We all know I love a good Cinderella retelling. I was excited when I first heard about this one, but after finding out it involved a war with the moon, a plague, and Cinderella being a cyborg, I was seriously worried it would collapse under the pressure of so many ideas in one book. I avoided it for years. Then I found the audiobook and decided to give it a go.

WOW. There was so much going on in this book. The war, plague, and cyborg aspects are only the tip of the iceberg here people. This book is beyond anything I’ve read in its sheer amount different topics, yet somehow they all fit together perfectly? How is that possible? It literally defies all expectations. ‘I am not a robot book’ it says. ‘Neither am I a war book, or a fairytale, or a plague story.‘ In fact, this book is everything. It’s like literary stone soup, and I loved every happy, miserable, hysterical second of it. I might have to listen to it again before I move on to the second book just to make sure I didn’t miss anything.

This was a book I found myself thinking about constantly when I wasn’t listening to it. It’s the kind of story where you figure a few things out, and then the rest of the twists throw you off a cliff that only the next book can fix. Except each book follows different main characters and they’re all supposedly going to converge at some point. It’s a pretty cool concept, even if it is another thing to add to the pile of things going on already in this series. I get the feeling I am going to need flow charts and graphs to follow it all.

As far as the actual audiobook goes, I enjoyed the narrator almost always. Her pacing was good, the voice differences were good, and the pronunciations were clear. But the voice that was chosen for Cinder’s robot companion, Iko, still echoes painfully in my head.