A year ago next week, I was getting on a plane to Seattle for a college broadcasting conference. At the age of 22, I was heading to the west coast for the first time. I was psyched to see the Pacific for the first time, but I was also a little nervous about my first real conference. Would everyone be dressed more formally than me? I didn’t have a suit then, so I just wore pencil skirts and dress shirts. I was pretty sure I was going to go stir crazy an hour into our six hour flight, so I packed some homework and a book to read. I was missing three days of class for this,  so I actually had quite a bit of work to do.

First of all, You can’t see the Pacific Ocean from the Seattle business district. It’s an island(?) or maybe a peninsula(?) in the middle of a bay, and there’s east and west Seattle on other islands/peninsulas on either side. So seeing the ocean was out because we didn’t have time to go all the way to the far side of west Seattle to see it.

Second, half of the people showed up in jeans. That’s broadcasters for you. Only the on-air-only people showed up in suits, and everyone was super nervous and mostly introverted, so we all chatted about our radio and television stations and exchanged business cards and never talked again. It felt like I was at a high school leadership conference to be honest. You could practically see the nerves floating through the air. But it was very educational, and everyone was friendly, even if they weren’t particularly outgoing.

Third, I was glued to the window of the plane for the entire flight. Clearly I had forgotten that this was only my second trip by plane, and that I hadn’t been to any of the states we were flying over. In the age of the internet it is easy to forget that we haven’t been to places that we’ve heard about and seen pictures of time and time again. I’m also a little obsessed with maps, and seeing all those mountains from 30,000 feet was AH-MAZING, so you could say that I was definitely not bored on the way there.

The conference was held at the Renaissance Marriott, which is flipping gorgeous and pretty expensive. We had to walk down a steep hill from the hotel to the waterfront as well as everywhere else, so of course we also had to walk back up the steep hill. I wouldn’t have packed heels if I’d known how hilly Seattle is. I remember thinking at the time that this must be what the people in San Francisco feel like, walking up and down hills all day long. 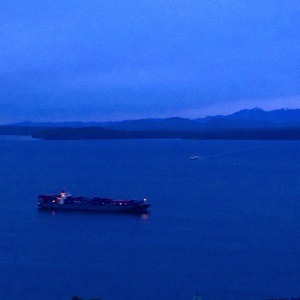 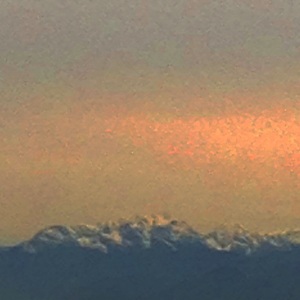 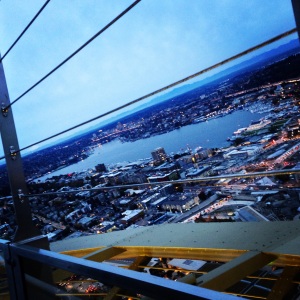 I’ll spare you most of the boring details, but let’s just say that A) non-seafood dinners are hard to find at a reasonable price, at least without taking a taxi somewhere. B) The business district basically closes at 5pm, Pike Place Market included, so it took us three tries to get there while it was open but the fish throwing was very cool. C) It’s a much father walk to the Space Needle than you think, but the view is totally worth it, and the only McDonald’s we ever found was only a block or so away from it.

I wish we’d had more time to explore, but we were there for the conference so we tried not to skip things. It was rainy the whole time we were there but it only actually rained on us the last night of our stay. Otherwise, the clouds parted whenever we left the hotel. It was pretty nice!

The flight back is actually a funny story. The friend I had flown out with had booked his tickets after me, and I guess I told him the flight I wanted to be on, but it had been blacked out for me, so we actually ended up on different flights home. His layover was in Denver and mine was in Houston. I left 30 minutes before him, but after an hour hold up in Houston because the plane had to be re-cleaned, I got back to New Jersey more than an hour after him. My dad was picking us up, so my poor friend had to chat with him until I got there. Not that my dad is bad. He’s pretty awesome actually, it’s just that the two of them had never met before and I wasn’t there to introduce them. My flights were pretty great though. I was really surprised by how green the Houston area was! (I’ve literally always pictured Arizona as a red-ish, rocky desert and Texas as a more yellowy-tan desert… I grew up watching a lot of westerns.) It’s really nice there, and I’d like to go back someday and actually leave the airport this time.

I finally had time to read my book on the flight back. The book, unsurprisingly, was Nicholas Sparks’ The Best of Me. I tend to pick up Nicholas Sparks when I’m in an airport, okay? I don’t know why. So, I was halfway through the book and nothing much had happened yet when I got on the plane in Houston. This nice couple in their 50’s or 60’s sat next to me. And then I got to all the sad parts… I should probably explain that I’m a crier. I cry for everything. Sad commercial? crying. Friend’s dog dies? tears. Sad movie? bawling. My own pet dies? bedridden for most of the day. So, sad books get me. Every time. And everyone knows that Nicholas Sparks likes to twist the endings of his books and make the reader bawl their eyes out. Only, I had zero tissues. So I sat there blubbering until the lady next to me basically adopted me and had the stewardess bring me a stack of napkins. She also kept checking on me to see if I wanted any food or a drink or anything throughout the flight. She was nice. That book was not.

By the time I got back to New Jersey it was one in the morning and my flight was 2 hours late. My poor friend had parked his car at my house and still had to drive home after got there. I learned a lot of lessons on that trip, not the least of which was to do extensive research on where you are going before you get there and get completely lost. Lucky me that I have pretty decent directional skills or we might not have made it back to the hotel. Cell phone map apps are so not helpful if you don’t know which way is north, by the way.

Check out some more pictures from my trip below, and let me know on Twitter if you’ve ever been totally wrong about a place you’ve visited!